Breaking Down Barriers and Changing Perspectives

Breaking Down Barriers and Changing Perspectives

You hear it before you see it. The forlorn call of an air-horn in the distance, the throaty sounds of a hardworking diesel locomotive, the clackety-clack of the rail wheels as they glide along the track, the dinging of the bells. As the MBTA commuter train slices into the station, it’s brakes sigh and its gray flanks, tinged with the essence of the rails, devours the peaceful setting. The train squeals to a halt, and with its arrival, Eric Dudek’s universe is in its rightful order. 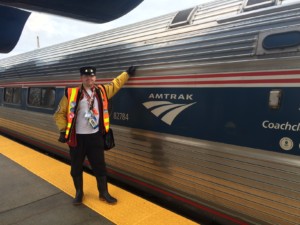 Eric is a young man living with autism; trains have been his life blood since childhood. “I used to ride the Newburyport and Rockport lines when I was a younger,” says Dudek. “I liked the sounds, and the motion of the train when I was on it. I liked how they looked and how they worked…I loved every moment of the train ride, and today, I love it more.”

Eric rides the rails daily, and every detail of the train experience, every nook and cranny along track, every signal system and railroad crossing along the way, the uniforms, the whistles, the tickets, the passengers, the schedules and the train routes, matter to him. Eric lives and breathes trains, train navigation and train safety; it’s his reason to get up in the morning.

“We’re all in awe of his knowledge,” says Judy Boutiette, a Career Resource Specialist with Work Opportunities Unlimited. “Eric knows what he’s talking about, I mean, he really knows his stuff. He can identify the different whistles, the different hand signals and their meaning, he knows all about the mechanics of the trains…he’s an incredible resource, a fountain of information. His dream is to someday work for the MBTA.”

As a Career Resource Specialist, Judy Boutiette spends her days breaking down the barriers to employment for people living with disabilities. Her mission is to change perceptions, and ultimately to change the world of work. “We operate from the premise that people with disabilities deserve to work independently in their communities, just like everybody else. We believe that all people can work, that everyone has something to contribute. At times, we help access workplace opportunity through volunteerism; it can be a stepping stone to competitive employment, a way for someone to get their foot in the door. People hear “disabled” and they automatically think the person doesn’t know what they’re doing. Nothing could be further from the truth; Eric proves that every day when he’s riding the MBTA.”

“Eric is amazing,” says Officer Dana Nye, the Community Outreach Coordinator for the MBTA Police. “He takes train to North Station or sometimes a bus to Logan Airport and along the way he tracks real-time MBTA info via transit apps on his cell phone. He’s so in tune with what’s going on that sometimes he knows about interruptions in the transit system before I do. Eric has a level of train travel expertise like no other but his overriding concern, always, is passenger safety. He absolutely feels that it’s his responsibility to keep people safe.” 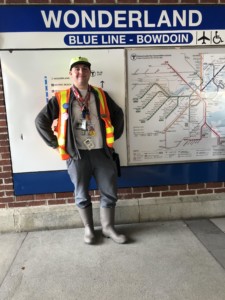 Eric’s passion for all things train runs deep, but according to Nye, there have been times when that passion has been misunderstood.

“His interest in the railroad, and train safety, and helping fellow passengers is so sincere, that he caught the eye of some of our well-meaning employees who gave him pieces of their uniform,” says Nye. “Eric started wearing them and assumed the role. People didn’t realize that he was a man living with autism, and they complained. One of our officers stopped Eric one day, thought he was masquerading as an employee, and took the uniform pieces away from him.”

Eric’s situation caught the attention of MBTA Deputy Police Chief Preston Horton. He recognized Eric’s talents and decided to “give him a job”.

“Eric is now our Volunteer Safety Ambassador,” says Nye. “We created the position especially for him. He checks in with me every other week. Sometimes he’ll assist me with handing

out safety info at the stations or he’ll accompany me to recruitment events but most days he rides the trains helping passengers when necessary and looking for safety issues which he reports to us through the apps he uses.”

“We have 2 million people who use the MBTA every weekday,” adds Nye. “One of our biggest concerns are suspicious people and packages. Eric is another set of eyes. The adage, “if you see something, say something” is meaningful to Eric; he lives it every day.”

“I keep an eye on happenings on the trains and in the stations,” says Eric. “I report intruders or trespassers on the tracks; it’s against the law to walk down the tracks. I keep my eyes peeled for safety issues and vandalism. I help people too. The most common question I get, is where to make a connection if there’s been a train disruption.”

There have even been a few instances when Eric has been a first responder. “A passenger alerted me to a medical emergency. I stood by the person and tried to calm them while we waited for help to arrive.  I was nervous, but the person made it OK.  Another time a pregnant woman fainted, a passenger hit the emergency intercom button and I stayed with woman. I took her information down and handed it to the authorities. I take all these issues very seriously.”

“The MBTA has given Eric an incredible opportunity to succeed and develop his abilities in an authentic way,” says Boutiette. “Many of our clients develop their skill set through volunteerism but Eric wants to work for the MBTA, we hope someday to make that dream a reality for him.”

“I think Eric has a gift,” says Nye. “He’s an incredibly friendly, caring and intelligent person who is blessed with an uncanny ability to take in and hold onto information. We’ve been lucky that his knowledge and positive energy have been channeled into his love for the MBTA. Eric is out there, and yes, he has autism, but that’s not who he is. Each time he steps onto a train and into his role of Volunteer Safety Ambassador, he demonstrates what is possible if you just give someone a chance. Eric’s breaking down barriers and changing perspectives, and we really like when that happens.” 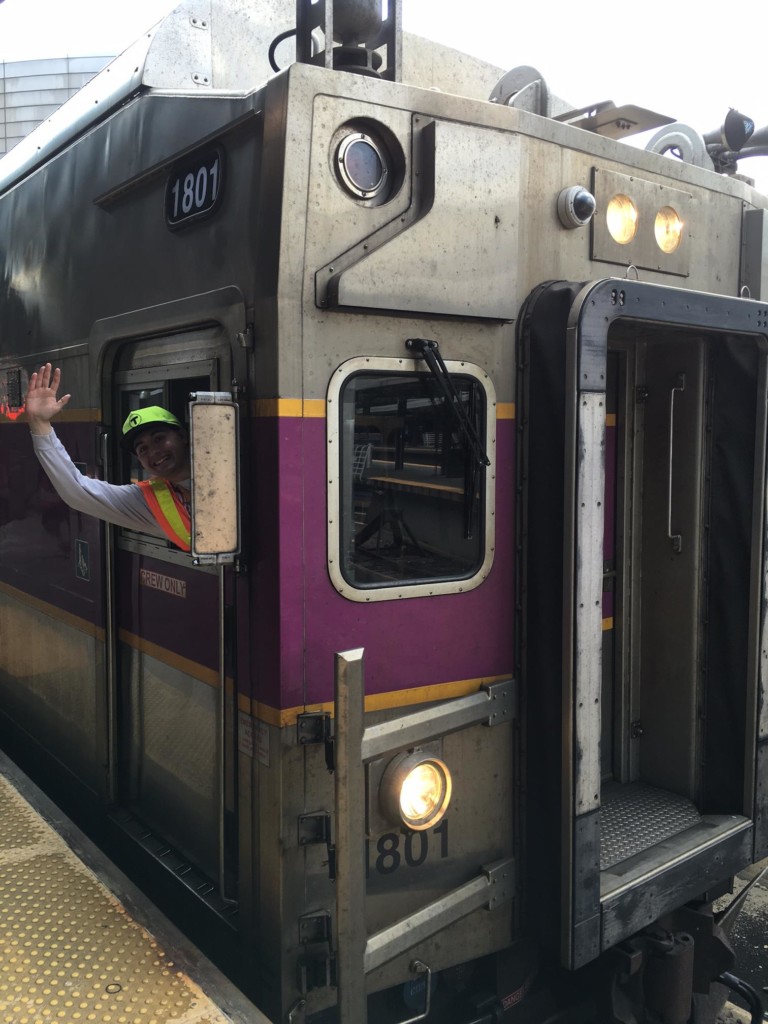