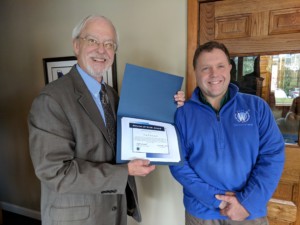 On October 25th at the Company’s Dover office, Tim Provencal of our Technology Team received a Success-at-Work Award. Tim, who supports virtually all team members with our technology needs, was nominated by four different people and his nomination was supported by Todd Robertson and Gayle Henderson.

In support of the nomination, here are what two team members wrote:

“I’d like to nominate Tim Provencal in IT for a Success at Work Award. His friendly demeanor and ability to troubleshoot computer issues while at the same time dissuading me from tossing my computer out the window is a testament to his patient interpersonal and IT skills. I really appreciate his calm approach and ability to convince me that all is not lost when I worry that the worst has happened electronically, and then seeing my problem through to the other side with a smile. He’s a great teammate!”

“I’d like to nominate Tim Provencal in IT for a Success at Work Award.  One example of Tim’s service level is when I received an email from a team member when we were switching over our phone system. She was very appreciative that not only did she receive thorough instructions from Tim, but also received pictures with circles and arrows. She was so impressed that he had taken the time to walk through the process with someone who has no experience doing so. This is just one small example of the extra mile that Tim goes with each of our interactions.”

In making the presentation to Tim, Steve Wood read these words of commendation from his Success-at-Work Award certificate:

We honor Tim Provencal for living the core value “We build successful reciprocal relationships” and particularly for his friendly, helpful, and non-judgmental technical support of all team members. Tim’s positive, collaborative attitude and his commitment to our successful Office 365 and telephone conversions make him a great teammate and a Success at Work!