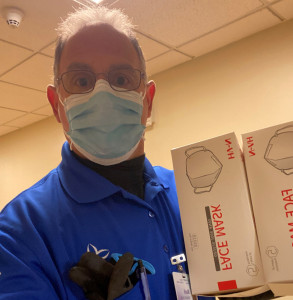 After Mark Robbins retired from a 30-year career in pest control, he realized that being fully retired wasn’t for him. He was working with Massachusetts Rehabilitation Commission (MRC) to prepare himself physically for returning to the workforce after dealing with some health issues, but realized he needed even more assistance in figuring out what his future career would look like. Through MRC, Mark was put in touch with Director Scott Niemczura of WOU’s Springfield, MA office, who set out to do what he does with all of WOU’s clients: break down barriers to help find meaningful and fulfilling work opportunities.

When they initially connected, Mark and Scott spent some time drilling down into what, exactly, Mark wanted to do. Scott commented, “Mark wanted a job where he could have a positive effect on someone else’s life, but wanted to do so behind the scenes. He told me, ‘Maybe I’m working in the kitchen to prepare meals or something like that. I know I’m not directly affecting their life, but I’m part of their plan to get better.’”

At the time, the world was dealing with the initial spread of the pandemic and Mark wasn’t sure he wanted to work right away, so with the permission of his MRC counselor, he and Scott took some time to work on a skills development curriculum. The experience was eye opening for Mark. Since he had had such a great reputation in the pest control business, Mark was often hired without going through the formal interview process, and he realized through working with Scott that he had a lot to learn about interviewing.

To prepare Mark, Scott conducted mock interviews where Scott would ask Mark questions like, “How do you deal with customers? What are your strengths? What are your achievements?” Through those mock interviews and other exercises, Mark discovered during that time that he wasn’t just a “pest control guy” with limited skills; in fact, he had built up several other skills—communication, customer service, creativity, etc.—over his long career.

When Mark was ready to start searching for a job, Scott helped Mark apply for opportunities within a local hospital. He was brought in to interview, and that’s when Mark realized just how much the WOU skills development curriculum helped him. “During my interview, I felt like I was geared for everything they had dropped in front of me,” Mark said. “When I was asked if I had any questions, I actually had some. I had to work through modules on the computer to qualify for a position, and it was good that I had worked with Scott on the computer, because it certainly helped me get through.”

In the end, Mark was hired for a transportation aid position in the hospital, working as part of a team to transfer patients from one area or bed to another. He said of his daily interaction with patients, “They don’t know what to expect [while in the hospital], and sometimes just a kind gesture helps.” Mark is also training to work as a medical supply clerk, where he ensures the doctors and nurses have what they need to help the patients.

Mark credits the support and training he received through WOU for his new career. Scott, though, credits Mark’s hard work and willingness to learn and grow. Scott said, “Mark took the training to heart like nobody I’ve worked with before. He would ask questions, interact, take notes, and even created binders to keep all of his notes organized.”

Either way, through the support of WOU and Mark’s tenacity, he was able to hone in on what he wanted and step into a new career with confidence and an open mind. Congratulations, Mark! We wish you success as you continue on this journey to a second career.