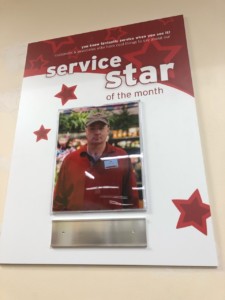 (Lowell, MA) – Disabilities come in all shapes and sizes; some are visible, others not.

For decades, Ben Webster of Lowell, Massachusetts, was confined to his home; unable to leave due to a crippling anxiety disorder called agoraphobia. A person with agoraphobia is afraid to leave environments they know and consider to be safe, for fear of having anxiety or a panic attack while out in the world. They may avoid leaving their home for days, months or even years. Like Ben, many people with agoraphobia can be seriously disabled by their condition.

“It got really bad in 1998 when I lost my grandmother,” says Webster. “She suffered greatly, and her death had a big impact on me. Over time, I became locked in my own fears and going out of the house meant going out of my comfort zone. Agoraphobia ruled my life; my world got pretty small.”

Webster saw a therapist and tried different medications, but his agoraphobia continued to limit his life’s activities. “Even though the fear ruled, I knew I wanted more. I wanted to live a more independent life; I wanted a job,” says Webster. “I talked to my doctor and said you need to help me so I can function.”

“We had worked with Ben for some time,” says Jazmin D’Urbano, Career Resource Specialist (CRS) with Work Opportunities Unlimited. “Initially, we would meet him on his front porch or close to home because he was too afraid to leave his ‘safe’ zone.”

As a Career Resource Specialist D’Urbano specializes in helping people with disabilities access the workplace. “We’re all about recognizing and supporting each client as an individual. We work to create opportunity based on a client’s life goals, and if they struggle, or if one way doesn’t work, we’ll take the time and try a different way – it’s as simple as that.”

“Over the span of time working together, it took a great deal to get Ben out of his home,” says D’Urbano. “He would use avoidance as a coping mechanism and would often cancel meetings. Because of his agoraphobia, it was difficult to find jobs and go through the process with Ben, but he didn’t give up and neither did we.”

“There were times when I wondered whether or not I could perform a job,” says Webster. “A new medication was a big part of my ability to step out, and then I met Jazmin. She supported me and pushed me a little more; she saw that I was flip-floppy but she hung in there and kept pushing me. Jazmin made me feel more confident, she always reminded me of how far I had come. Even on the bad days, I did not want to give up; I knew there was something at the end of the tunnel.”

“Ben’s confidence evolved over time,” says D’Urbano. “When he expressed anxiety, I would remind him of all his hard work to get to this point. I reminded him of the strides he’d made; I’d recognize how he was feeling and then we would move forward.”

“Eventually, I set up an interview for Ben at Hannaford. The employer was not aware of his anxiety disorder. Ben was nervous in his interview and he thought he didn’t do well but was happily surprised when he got the job.”

“On the first day I was really nervous,” says Webster. “I needed a lot of help from Jazmin; now it’s like riding a bike – I can do it in my sleep. I work front of the store; I check expiration dates on merchandise and stock items on the shelf; I help customers too.”

In fact, Webster was recently awarded Hannaford’s coveted Service Star of the Month award due to his outstanding customer service. “I didn’t see it coming,” says Webster. “I felt so honored when I was told that I was important; that my work mattered.”

“The change from where I was 2 years ago, it’s like night and day,” adds Webster. “I can’t compare the two. I’m so much happier; I think I’m smarter after doing all this; I’ve matured. Before this experience I didn’t know how to communicate very well but being out there in the workforce, interacting with people, it helped me tremendously.

Jazmin checks up on me every once in a while, but for the most part, I’m on my own. Having Jazmin’s support was a large part of my success. I used to have a tendency to give up, but she would coach me to talk about things and counsel me not to quit; she never let me quit.”