The Right Job. It Has Made the Difference – Meet Kendell Littlejohn

The Right Job. It Has Made the Difference – Meet Kendell Littlejohn 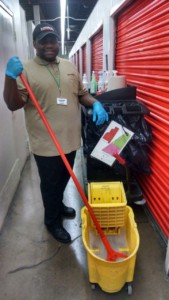 (Pawtucket, RI) – It’s pretty hard to miss. The U-Haul Moving and Storage facility, with its telltale bright orange doors and neatly parked trucks, captures a good swath of the real estate as you head north along the route I-95 corridor in Pawtucket, Rhode Island. Considered a local landmark, this U-Haul facility makes no bones about its size; it’s one of the largest of its kind in the state.

“It’s a huge facility,” says Zack Genest, Career Resource Specialist at Work Opportunities Unlimited. “Its two buildings that span several acres between exits 25 and 26. It’s so big, it requires 4 shifts just to keep it clean.  Due to its sheer scope and size, the employees there have to be able to work autonomously so it’s the perfect match for Kendell.”

Kendell Littlejohn is on the autism spectrum. He had never held a job in his adult life. He’s incredibly smart, motivated and he loves to be busy every minute of every day; Kendell’s a hands-on guy. He also has difficulty communicating and suffers from social anxiety. “Kendell wanted to work but he didn’t want to be around a lot of people,” says Genest, “the stimulation is too much for him, so I had to do some serious scouting to find a job that would fit the bill.”

As a Career Resource Specialist, Zack Genest spends his days breaking down the barriers to employment for people living with disabilities. He’s also a job developer, a master at connecting the right employer to the right employee, and supporting the fledgling relationship every step of the way.

“I wandered a little off the map looking for this job for Kendell,” says Genest. “U-Haul was one of the leads that I found. I toured the facility and noticed that it was a quiet place that just might work for him.”

U-Haul Moving and Storage of Pawtucket offers the full array of services for its customers including U-Haul trucks and trailer rentals, portable storage containers and moving supplies, but the jewel in the crown is the storage facility.  “We have twelve hundred storage units that range in size, some of them are climate controlled, and we have long expanses of corridors, all of this needs to be maintained,” says Corey Perry, General Manager of U-Haul Moving and Storage. “When Zack approached me, and explained the program, and what Work Opportunities was all about, I was open to the possibilities. We had a maintenance position to fill and we needed someone who paid attention to the details, was consistent and reliable, and someone who could be part of our team but could work independently as well.  It’s a big, active facility and it takes a lot of manpower to keep things running smoothly.”

“Kendell applied, he was a great applicant, and we scheduled an interview,” adds Perry. “Just like everyone else, he underwent an extensive background check and once everything panned out, I hired him. Kendell does cleaning and maintenance for us. It’s the most important job. He makes sure the facility is clean so that our customers always have a great first impression each time they walk through the door. Our storage facility is full because of what Kendell does; his work keeps people coming back.”

“Corey and the team at U-Haul have been amazing,” says Genest.  “Corey spoke with his staff before Kendell arrived, he wanted to make sure that everyone was on the same page and aware of Kendell’s needs. Initially, Kendell was very shy and wouldn’t interact with co-workers, so we made the rounds. During the first few shifts we introduced ourselves to each employee. Kendell would continually reference sports, it’s the one conversation that he’s comfortable having. The introductions helped Kendell build wonderful natural supports and now co-workers freely engage with him in sports talk on a regular basis.”

“Zack’s been great at troubleshooting the communication piece for us,” says Perry. “He made a map of the facility that’s color coded; it makes it easier for Kendell to navigate his way around and to know which area of a building he should be working in on any given day. It took a little time but now he has the lay of the land and works on his own; he’s self-directed.”

“Having a job has made a huge difference in Kendell’s life,” says Genest. “He’s grown socially; he’s now able to pick up on non-auditory social cues, he makes eye contact, he’ll engage with people and will even smile.  Plus, it’s improved his optimism, he’s happier.  He loves that he’s able to go places because he can afford Uber rides. His guardian’s goal is to have him be independent and thanks to this job, he’s making a lot of headway.”

“Kendell’s one of the best employees I have,” adds Perry. “All the employees love him, and his work ethic feeds them. They say, ‘If Kendell can do it, we can too.’ All we did was give Kendell an opportunity, he did the rest. For any employer I would encourage them to take that chance because it will benefit you in the long run. Don’t judge by the disability, judge by a person’s work habits. That’s the way I see it. Kendell wanted this job, he appreciates his job and we appreciate him. He’s working hard and making a difference here at U-Haul.”