Meet Keith! His Great Job in Security is a WOU Success Story

Meet Keith! His Great Job in Security is a WOU Success Story 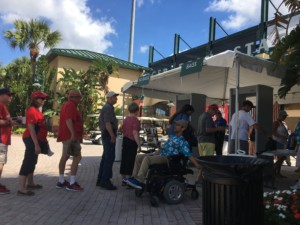 (Jupiter, FL) –  Keith Grieser is a pretty amazing young man. Actually, determined would be a more accurate way to describe how Keith lives his life. Born with cerebral palsy, Keith has little control over his body. He uses a wheelchair to move about his world and he requires the use of an adaptive audio device to communicate.  Upon first glance, many would think that the odds are stacked against him, but remember, Keith is determined.  Case in point – when Keith graduated from Seminole Ridge High School in 2015 he was determined to walk across the stage to accept his diploma; it would be the first time he walked in fourteen years.

When Keith graduated from high school, he was bound and determined that he was going to live as independent a life as possible. Central to his plan was finding a job.

“Keith’s counselor at the Florida Division of Vocational Rehabilitation reached out to us,” says Susan Scaperotto, a Career Resource Specialist with Work Opportunities Unlimited. “We specialize in helping people with disabilities find community based employment.”

Work Opportunities Unlimited believes that all people can work, that everyone deserves opportunity and can make a contribution. “Keith made it very clear that he wanted a job and we didn’t think that was too much to ask,” says Scaperotto. “His situation was pretty complex so our team decided to hold a brainstorming/networking session. We invited his family, his VR counselor, people in the community that knew him, human resource managers…our goal was to make a list of all the tasks that Keith could perform and places we could envision him working. We wrote it all down and came up with a hundred ideas for Keith. Then we whittled it down further by looking at companies that offered those types of jobs, we networked with local businesses people and started making phone calls.”

“We made a great resume for him and were able to schedule a few interviews right away but the employers were too hesitant to hire him; they couldn’t see the possibilities and what he was capable of doing, so we decided to stop applying to run of the mill places. We knew that top of the list for Keith, was a job working in the security sector. All we needed was someone to open the door to him.”

Winter home to the St. Louis Cardinals and the Miami Marlins, the Roger Dean Stadium in Jupiter, is the only stadium in Florida to host two Major League Baseball teams and the only stadium in the country to host four minor league teams. “This year new security protocols, mandated by Major League Baseball, were put in place,” says Alex Inman, the Assistant General Manager at Roger Dean Stadium, “so we were looking to hire 50-60 new employees. When Susan contacted us, we spoke about Keith’s abilities and his limitations. We believe in opportunity for all but we also had to do our due diligence; Keith had to be able to do the job. We interviewed him, took everything into consideration,  focusing on what he could do, and we hired him.”

“We have upwards of four thousand people in attendance during spring training and Keith works on the front lines,” says Kyle Schafer, Event Services Coordinator at the stadium. “He’s positioned at one of three entrance gates and his job is to prepare our visitors for the security screening by informing them about emptying their pockets and moving through the metal detectors. Keith pre-programmed his audio device with a script we provided, so when visitors’ approach him, he taps the button on his headrest that engages the announcement. Our visitors hear it as they pass by, and they’re prepared. Keith’s efforts help to streamline the process and he’s making the work load a lot easier for his co-workers.”

“Through this job, Keith has grown in confidence,” says Susan Scaperotto, “You can see it in his face. He knew what he wanted; he wanted a job and he was determined to get it. Now, he has friends and co-workers, he even has natural supports in place at Roger Dean stadium so he’s comfortable with not always having me there to support him. As a matter of fact, these days when I show up, he’ll ask me what I’m doing there! Keith is part of his community and he’s contributing in meaningful ways; you couldn’t ask for more than that.”

“A lot of people praised us for hiring Keith but this isn’t just a feel-good story,” says Inman.  “We want everyone who comes to the stadium to have a positive experience and the safety and security of the fans, the players and coaches is paramount. We feel that Keith is doing an important job and he’s a positive force. He’s inspired our team for sure; he’s been a pleasure to have here, everybody loves him.”