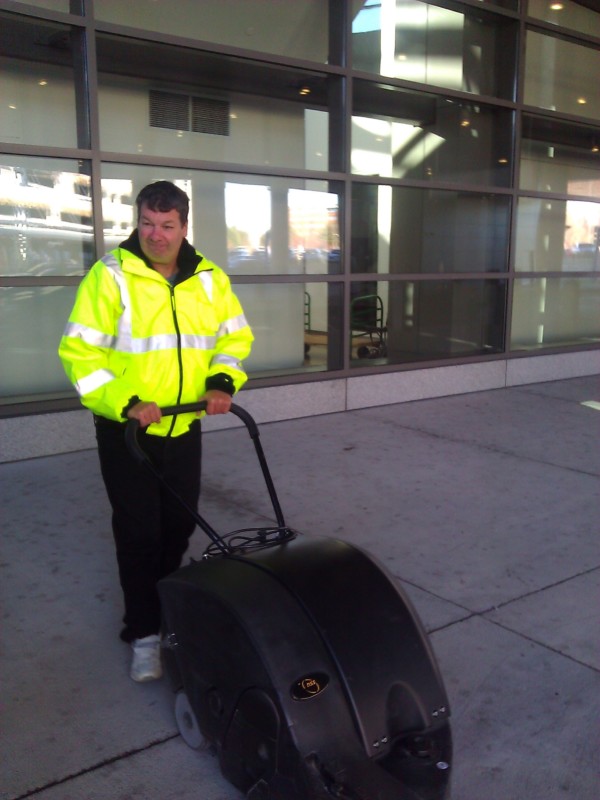 (Portland, ME) – Awards for the Best Airport in North America don’t just happen; it requires particular attention to the details, a dedicated team and a lot of hard work. In Maine, the Portland International Jetport was recently named the best airport in all of North America, receiving the Airports Council International’s (ACI) 2015 annual Airport Service Quality Award for airports serving under 2 million passengers.

The Jetport took top honors for attributes like efficiency and wait times for check-in, courtesy and the friendliness of airport staff, and the cleanliness of the terminal. That’s where David Haron comes in. David is a friendly guy and he’s a master at keeping the main entrance at the Jetport neat and tidy. From the ticket counter, to the meet and greet area; the baggage claims and out to the curb, David is a stickler for making sure every nook and cranny is spotless, inside and out.

“We have pretty high standards here,” says David Raymond, of ISS Facility Services and District manager for Portland International Jetport. “First impressions are important. The front entrance is the first thing people see when they come to the Jetport so their experience matters. David does a super job of cleaning the front of airport from one end to the other – he does it twice per shift – and he does it with a smile on his face. It’s pretty clear that he loves his job because it shows in the quality of his work.”

David is one of four employees on the Jetport campus that are tasked with the custodial work. His job was made possible with help from Work Opportunities Unlimited. “We believe that all people can work, that everyone has something to contribute,” says Dan Ruiz. As a Career Resource Specialist, Ruiz makes community based employment possible for people with disabilities. “I help to break down barriers to the workplace and I also support people like David while they’re on the job. Here at the Jetport, David is part of the whole. He’s a team member who has great skills and a huge personality to match; he contributes to the Jetport in significant ways.”

To get the job done, David uses the tools of the trade including a battery powered sweeper that he refers to as his “machine.” He handles the machinery like a pro and while the work that he does looks very simple to the untrained eye, according to David Raymond, his work extends beyond that of custodian. “David is very likeable and always has a big smile to share. When people come to the Jetport, they can lose their way, they can become flustered because they’re nervous about getting on a plane. When David is out there working, being friendly, saying hello to everyone as they pass by, he deflates the situation; he takes their mind off their anxieties. In that moment, that interaction is priceless to the person that’s on the receiving end.”

“David takes incredible pride in his work,” adds Raymond. “That’s not something that you see every day. His work matters and has tremendous value to me, and to our visitors. There’s no doubt that David contributes to the success of the Jetport and the added value is, he just has a way of making your day.”