(Falmouth, ME) On September 27th, Zach Dandy, a Career Resource Specialist in our Portland market, was awarded a Success-at-Work Award during a team meeting. He was nominated for the award by Sarah Pednault, our director for the market. 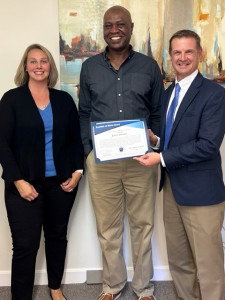 During the presentation Sarah highlighted Zach’s work with an individual who experiences a traumatic brain injury and severe depression.  Zach began working with him in February of 2018 when he was referred to WOU by Vocational Rehabilitation. Because the individual was also homeless, it took a lot of work from him and his entire team to get him to where he is today.

Zach was able to help the individual secure a position as a custodian/dishwasher at a restaurant, but it didn’t stop there.  Soon the individual was completing cooking tasks independently, which helped to ensure the restaurant was keeping up with customer orders.  Working on his independence and effective communication with supervisors and coworkers were two goals the individual was working on with the help of Zach.

Unfortunately, in June of 2021, the individual was let go, due to unprofessional communication with a supervisor.  Zach immediately stepped in and scheduled a team meeting to discuss what happened.   The individual first blamed the manager for him getting fired.  Zach and the team gave the individual two weeks to process the situation, and the reason why he was let go.  He needed to understand that this was a natural consequence for his behavior.    After processing this, the individual called Zach and told him he was sorry, and that he wanted to go back to work at the restaurant.  Zach immediately scheduled a meeting with restaurant management, during which they agreed to give the individual another chance.

Not only did Zach help the individual get another chance, but his communication and independence has greatly improved.  He now works independently and has increased his work hours.  Zach’s commitment   and perseverance resulted in a second chance that has paid off, not only for the individual, but to his employer.

In making the presentation Ryan Mountain presented Zach a certificate which read:

“For his commitment to our core value, “We are never satisfied.”  Zach’s work is a clear illustration of his commitment to never giving up.  Zach helped an individual, who had been homeless, secure employment at a local restaurant.  Zach worked with him on his communication and task completion, however the individual was let go due to unprofessional behavior.  That didn’t stop Zach, who stepped in and was able to get him another chance.  After being provided a lot of support, the individual is now working independently and is working more hours than when he started.  Zach’s commitment and perseverance has resulted in great success in the workplace.”