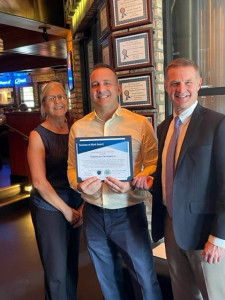 (West Palm Beach, FL)  On October 26th, 2022 Tommaso Fattovich, a Career Resource Specialist in our Broward, FL market, was awarded a Success-at-Work Award during a team meeting. He was nominated for the award by Sue Abel, our West Palm Beach and Broward Director.

“I would like to thank Tommaso for never giving up, and believing in Justin.”     Justin came to us in February 2020 with a goal of becoming a receptionist or an information clerk.  Tommaso helped Justin obtain an OJT (On-the-Job-Training) at a gym in March of 2021.  Ultimately, it wasn’t a good fit, but Tommaso learned much about Justin and his abilities during this experience.  Subsequently, Tommaso found an opportunity at Regal Cinemas through Taylor Kron, the General Manager.  Tommaso skill marketed Justin to Taylor and Taylor agreed to an interview.  Justin was prepared for his interview and supported by Tommaso and was offered the position by Taylor as an usher and started in October of 2021.  In the beginning, Tommaso supported Justin with his challenges of transportation arrangement, scooter storage, schedules, personal care needs, dietary /safe food choices during work needs, and a few other challenges that were not originally anticipated.  Throughout Justin’s work at the theatre, there were some health issues which caused him hospitalization several times, so he was in and out of work.  During this time, Justin sometimes needed assistance with the documentation that Taylor needed for his absences at work.  Justin has been able to count on Tommaso to support him to be able to keep his job.  Justin is back at work now and is a vital part of the team at Regal Cinemas.  His life is changed by having a job and a purpose and Tommaso’s belief in him helped to make it happen.   In addition, the WOU team recently awarded Regal Cinemas a plaque in recognition of the support they have provided to Justin as well as two additional clients Tommaso has successfully placed there. 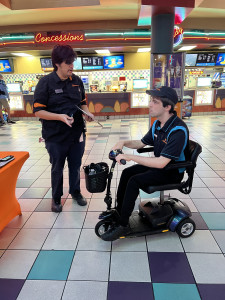 In making the presentation Ryan Mountain presented Tommaso a certificate which read:

“For his commitment to our core value, “We are never satisfied.” Tommaso’s commitment to Justin started with an OJT in 2020.  Although the OJT wasn’t a job match, Tommaso learned a lot about Justin’s abilities and subsequently placed him at a theatre where Justin loves his job.  Despite Justin’s multiple challenges with his health, hospitalizations, transportation, and more, Tommaso has supported Justin and the employer to keep the position.  As a result of this position, Justin’s life has changed and Tommaso’s belief in Justin made it happen, making Tommaso a Success at Work!”

The “Success-at-Work” award, which began in 2000, periodically honors and recognizes team members who have delivered outstanding service to our clients consistent with the Company’s core values.