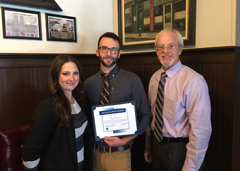 (Providence, RI) On Thursday, October 22nd Mike Amons, a Career Resource Specialist in our Providence, Rhode Island market, was awarded a Success-at-Work Award during a team leader meeting. The award, which was presented by Steve Wood, followed a summary of his nomination by Trish Wagner, our Rhode Island director.

In her nomination Trish spoke of the many ways Mike helps clients and teammates. Here’s what Trish wrote about one client named Eric.

“Within the first few months of Mike working at WOU he was given a client Eric who we have been working with for over 5+ years. Eric had recently quit his job at Burger King, which he had for many years, mostly because he was bored and did not feel challenged. What Eric did not realize by leaving that position was that he was also leaving a lot of his community supports, and friends. In the months to follow Eric became unwilling to leave his house, secluded, and turned to his video games as his new friends. Mike had the challenge of earning Eric’s trust and getting him out in the world again. Mike recognized what Eric was feeling and came to the conclusion that they needed to take very small steps in order for Eric to want to join the world of work again.

Mike began with small outings to the local Dunkin Donuts to get Eric comfortable leaving the house again, which lead to him attending Job Club. Eric was again interacting with fellow job club members and beginning to build his confidence with other people.

Mike knew that Eric was ready to work but it was about finding him the right job, one that had a quiet working environment with routine tasks that would allow Eric to be successful. Mike did a great deal of skill marketing and then came across a small business in Eric’s neighborhood, “The Paper Store”. Mike was completing a CI and PT, and through his tour he noticed that some areas of the store needed some attention. The back room was very messy and Mike observed that they did not have a team member solely dedicated to working back there. Mike saw this opportunity and addressed this with the store manager. Mike was able to tactfully bring this to the employer’s attention, leading to a meet and greet and ended with Eric in a successful job, that he loves and is continuing to flourish.”

In making the presentation Steve Wood presented Mike a certificate which read:

Work Opportunities Unlimited honors Mike Amons for always living our core value “We believe all people can work” and for the many individuals Mike has personally guided to success. Of special note is Mike’s persistent support of Eric and his success at the Paper Store. Mike’s commitment to clients, easy communication style, and positive attitude, makes him a great teammate and a Success at Work!