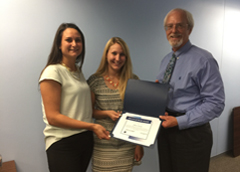 (Woburn, MA) On July 28th Jillian Sands, a Career Resource Specialist in our North Shore, Massachusetts market, was awarded a Success-at-Work Award during a team meeting. She was nominated for the award by Directors, Erica Feldman and Elena Gendron.

“Earlier in the year, Jill was working with an adult, Ashley, through our DCF program who was referred to us for job placement. She had a unique set of skills including experience with medical terminology. Although extremely capable of obtaining a job, Ashley did not willingly meet or invest in the program right away. Through Jill’s persistency she was able to show Ashley the positives of obtaining community employment and was ultimately able to place Ashley into her ideal job. This position was exactly what Ashley wanted including days, hours, responsibilities, and exact location! Ashley is happily employed as a full time medical secretary at her Union Hospital in her local neighborhood.”

In making the presentation Steve Wood presented Jillian a certificate which read:

Work Opportunities Unlimited honors Jillian Sands for persistently committing to the core value “We are never satisfied” and helping people believe in themselves and move past their barriers. Of special note is Ashley and Mark’s success that followed Jillian’s encouraging support. Jillian’s commitment to clients and positive attitude, make her a great teammate and a Success at Work!

The “Success-at-Work” award, which began in 2000, periodically honors and recognizes team members who have delivered outstanding service to our clients consistent with the Company’s core values.