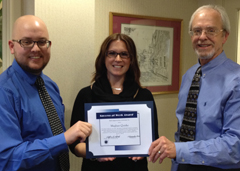 (Stoughton, MA) On Monday, November 17th Meghan Quirke, a Career Resource Specialist in our South Shore Massachusetts market, was awarded a Success-at-Work Award at a team meeting. The award was presented by Steve Wood following a wonderful description of Meghan’s client service successes by Bill Mullin, the South Shore director, who nominated her.

In making his nomination, Bill highlighted Meghan’s commitment to the individuals we serve and especially the work she did with Robert. Here is a portion of Bill’s written nomination that talks about Robert:

“Robert has Asperger’s Syndrome and sometimes has difficulty maintaining appropriate behaviors verbally. This sometimes causes him to talk too frequently without a filter. Prior to his interview at Shaw’s, Meghan informed Hiring Manager Kelly about Robert and skill marketed the great experiences he had working through school internships and at a local zoo. She also let Kelly know that Robert can sometimes take a conversation a little too far, but in the right environment he could really excel and endear himself to store patrons. This conversation paid off, as Kelly took Robert’s quirks in stride and helped him stay on track when he had a follow up conversation with the deli manager. He was soon offered the position.”

In making the presentation Steve Wood presented Meghan a certificate which read:

Work Opportunities Unlimited, Inc. honors Meghan Quirke for always living our core value “We believe in individual initiative and dignity” and always advocating success for the individuals we serve. Of special note is the impact Meghan’s leadership had on Robert’s career at Shaw’s. Meghan’s commitment to clients and positive attitude, make her a great teammate and a Success at Work!

The “Success-at-Work” award, which began in 2000, periodically honors and recognizes team members who have delivered outstanding service to our clients that is consistent with the Company’s core values.