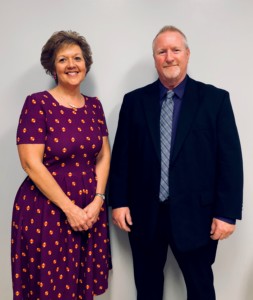 To say that Elaine St. Pierre was in the right place at the right time when she attended Maine’s Division of Vocational Rehabilitation (VR) quarterly meeting would be an understatement. Elaine chose to attend the meeting only because she was encouraged to do so by a VR supervisor, and out of the 25 or so other people in attendance, she chose to take a seat next to Mike Murtha, director of WOU’s Auburn, Maine market. She wouldn’t realize how impactful those decisions were until later that day and how far the power of connectivity would take her when she needed it most.

When Elaine arrived at the meeting, she sat next to Mike and only had time to exchange quick introductions with him before the program began. During the meeting, Mike spoke of WOU’s accomplishments during the prior quarter and what services the organization was providing for their clients. He also offered all attendees a handout that gave them access to WOU’s industry-related webinars. Always on the quest to learn more, Elaine grabbed a handout as she left the meeting.

Upon returning to work that day, she was asked to meet with her boss and her boss’s boss, and learned that not only was her job being eliminated that day, but the entire program was ending, as well. Elaine had worked for her former employer for three years and loved what she did, and although signs indicated that changes were on the horizon, she was caught off guard by the news.

Knowing she had to work fast to find another position so she could ensure she would be able to continue serving her existing clients before they would be forced to start over with a new representative, she immediately went to work to find a new position. She reached out to the VR counselors to let them know what had happened, and she also thought, “That Mike guy was kind of cool; maybe I’ll reach out to him.” She retrieved his contact information from the piece of literature she had taken from him that morning, sent him an email to reintroduce herself and tell him what happened, and asked him to consider her if there were any opportunities with WOU.

Unbeknownst to Elaine, one of the VR counselors with whom Elaine had worked also reached out to Mike, letting him know that she had worked with Elaine for several years and thought she would be a super addition to Mike’s team. Mike was already in the process of having WOU’s director of recruiting reach out to Elaine based on her email, but the unsolicited endorsement from the mutual contact made the idea of hiring Elaine even more attractive.

Mike says, “In the state of Maine, one needs to be a certified employment specialist to work with VR, so the fact that Elaine was already certified was a plus. The second plus was certainly the referral from the counselor.”

Elaine went to an initial interview with Mike, and walked out unconvinced the role was right for her, but she decided she had nothing to lose by going through with the field interview the next day. After spending two and a half hours shadowing a career resource specialist and asking him every question imaginable, she realized how great of an opportunity this was and accepted the job when it was offered to her the next day.

“I’m so happy I decided to go through with the interviews and accept the position with WOU,” says Elaine. “Everybody has been so gracious, kind, and patient with me, and I’ve really enjoyed learning the ‘right’ way.”

Mike is equally as happy that Elaine attended that meeting that fateful day and wound up working for WOU. He says, “I thought Elaine would be a good match for the organization, and both of her interviews confirmed the same. One never knows; just because someone’s successful somewhere doesn’t mean they’ll be successful with us. Just the fact that she made three placements in her first 30 days with us tells the whole story.”