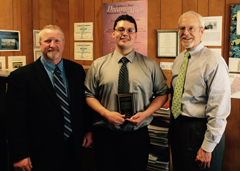 (Auburn, NH) Josh Toner, a Career Resource Specialist on our Auburn, Maine Team, was presented our Company’s first annual client employment Retention Award. The Award was presented by David Dwyer and Steve Wood during an Auburn Team meeting. Josh was nominated for the award by Mike Murtha. The award has been created to recognize a Career Resource Specialist who has very effectively helped a client retain his or her job after facing on-site barriers. Josh was chosen from a group of very deserving companywide nominations.

In his nomination Mike described how Josh helped Arnold be successful. Here is an excerpt from what Mike wrote:

“Arnold was having a hard time clocking in and out due to him not being able to read the order and content of instructions to follow, so Josh created a picture list he could follow, which alleviated any issues going forward.

“Another issue that Arnold had related to his lack of literacy skills, was taking and passing all the computer based training that was required of new employees. Josh spoke to the HR manager who approved an accommodation of Josh reading the questions to Arnold, which got him through this important work requirement.

“Josh also coordinated with HR on a way to have a natural support / co-worker, take over helping Arnold with his CBTs going forward, which was a great strategy making Arnold more independent, and Josh fading his support.

“When Arnold’s only form of mobility that is necessary for the job, his power wheelchair, was malfunctioning and would not maintain a charge, Josh contacted the VR Counselor, advocated for Arnold, and this resulted in VR funding the needed repairs to his wheelchair. While waiting for these repairs to be funded, Josh was able to facilitate some of Arnold’s co-workers from the automotive department, who were mechanically inclined, to do some maintenance work on the chair to keep it functional and keep Arnold working.”