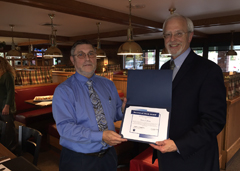 (Westbrook, ME) On Monday, October 5th Gerry Lalime, a Career Resource Specialist on our Brunsport, ME team, was awarded a Success-at-Work Award at a team meeting. Gerry was nominated for the award by his director, Sarah Pednault, who described Gerry’s great work with a number of clients.

In making her nomination, Sarah highlighted Gerry’s diligent and open communication style with employers, which leads to high levels of trust among all the parties and great, long-term placements. Here is a condensed portion of what Sarah wrote about Gerry’s work:

“William is a client that was referred by VR. When he was referred, Gerry was told that William most likely would not be able to work, Gerry met with William and his team. During the meeting William sat quietly. His Case Manager filled Gerry in on William’s disabilities, which include some significant intellectual delay, a high level of social anxiety and occasionally aggressive. This past aggressiveness was the basis for the need (at the time) to have two male staff members with him at all times. Gerry was tasked by the VRC to do 1-3 trail work assessments to see if William could benefit from services. William had never worked before and even his mom was not sure he could work.

For the next two months, William experienced volunteer work at a horse farm, mucking out stalls. This was followed by an extended work assessment at a Walgreens where he was tasked with stocking shelves. Gerry evaluated his capacity to follow instructions, even in an unsavory task (farm) and then on a more extensive work-trial in a busy retail environment. It became clear that a job that required repetition and provided a supportive environment would be necessary ingredients for successful employment. In the course of contacting likely suitable employers, Gerry met and completed a company interview with a small high-end food market in Freeport, Maine. During the meeting with the store’s general manager, he indicated the desire to be able to “give back” to the community and explore possibly hiring a person with disabilities. Gerry gave the manager the whole picture of William, the good and the bad. The manager interviewed William and decided to move forward with an assessment.

After trying different tasks, it was determined that William would wash the soiled meat trays in what I call the “cold room”. William washed the trays using the proper dish washing technique and putting items away in their proper storage areas. After the 20 hour assessment was completed, William was hired! Over the months that he has been employed, William has been able to grow and gain some control and independence in his life. At Home he always has 2 staff with him at all times. At work William walks in holding his head high, greets his co-workers now. He also is learning new tasks at the job. Gerry provides 100% support for William at work. Gerry has learned to read William body language. If William seems stressed Gerry will ask William if he needs to leave. William each time tells Gerry,” No, I want to work.” William loves to get paid to work and each week he goes and buys himself something with HIS money that he earned.”

In making the presentation Steve Wood presented Gerry a certificate which read:

Work Opportunities Unlimited, Inc. honors Gerry Lalime for always living our core value “We believe all people can work” and for the dozens of individuals Gerry has personally guided to success. Of special note is Gerry’s persistent support of William. His commitment to clients, easy communication style, and positive attitude, make Gerry a great teammate and a Success at Work! The “Success-at-Work” award, which began in 2000, periodically honors and recognizes team members who have delivered outstanding service to our clients that is consistent with the Company’s core values.