When Tommaso Fattovich, a Career Resource Specialist with Work Opportunities Unlimited first met his new client, Jeremy, he noticed Jeremy’s welcoming smile and shyness. Jeremy, who has autism, had very limited verbal communication skills and only spoke a few words. Tommaso was eager to help Jeremy find an appropriate workplace setting to become more integrated into his community. 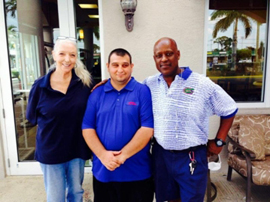 Tommaso and Jeremy began meeting at the Work Opportunities Unlimited office to practice Jeremy’s interviewing skills and determine where Jeremy wanted to work, but Jeremy couldn’t say much at all. It was challenging for Tommaso to figure out what potential workplace options interested Jeremy.

Tommaso decided to hold a meeting with his Work Opportunities Unlimited co-workers to brainstorm about how to proceed. One colleague suggested that, typically, individuals with autism respond well to illustrations and video clips. Following this advice, Tommaso started showing Jeremy video clips and images of various workplaces. As Tommaso pointed to pictures of different workplaces, Jeremy was quick to respond, but always with a “no!” or a “nah!,” indicating that he didn’t like these options.

Next, Tommaso tried a different tactic, driving Jeremy around town to see numerous businesses, trying to get an idea of what appealed to him. Unfortunately, even after driving all over town, nothing seemed interesting to him.

Tommaso parked the car in a bit of despair and said, “Jeremy, I don’t know what else to do. I don’t know what to do with you.” Jeremy understood what Tommaso was saying, and suddenly, Jeremy pointed to a car parked next to them. Tommaso immediately tried to decipher the meaning of this.

“Car? What do you mean by car?” Tommaso asked Jeremy. After thinking about it for a few moments, Tommaso asked, “Car wash?” and Jeremy finally said “Yes!”

Tommaso immediately drove to a nearby car wash, stepped out with Jeremy and had him observe the work environment. Jeremy nodded and finally showed Tommaso what he envisioned as his job goal.

The challenge wasn’t over though. Tommaso still had to figure out how he could market Jeremy’s skills and abilities and get him the job that he wanted.

The first business gave Jeremy a one day trial. Jeremy got to see what working at a car wash entailed, and spent a few hours observing the business. In the end the owners decided not to hire Jeremy, but it was a great experience for him all the same and Tommaso determinedly moved on to the next prospective business.

Royal Car Wash was open to meeting Jeremy right away. Call it luck (but also continuous effort!) but Tommaso found a match! As an added bonus, the owner of this particular business already had personal experience working with people with barriers to employment and promised to welcome Jeremy warmly.

Tommaso met with the owner and managers and they were all eager to meet Jeremy. They allowed Tommaso to do an “on the job training” with Jeremy for a solid week. Tommaso and Jeremy worked side by side with some truly wonderful and understanding people. In fact, Tommaso said he wished all companies were full of people like them. Not only were they were open to having Jeremy work with them, but they also treated him like one of the team, talking to him and cracking jokes, which made Jeremy happy. During this process, Tommaso could see an awakening in Jeremy, which manifested itself through his positive feedback. When asked questions, Jeremy was ready to speak and gesticulate vibrantly. He felt at home.

Jeremy was officially hired for a few hours a week. He begins each work day by cleaning the property of trash. Later, he’s responsible for spraying down cars with the power wash spray and removing antennas from cars before they enter the car wash.

While he begins with these small tasks, Tommaso anticipates additional growth and progress for Jeremy in the future. Tommaso believes that this new job is allowing Jeremy to increase his confidence and ability to communicate. His shy demeanor has almost disappeared, and it’s been rewarding for all involved to see such positive advancement. This process has helped Jeremy tremendously, as he’s transitioned from being quiet, introverted and not speaking to being a more outgoing, popular member of the group.