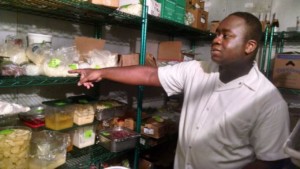 (Providence, RI) – Most of us have a passion in life. It may be yoga, ballroom dancing, sports, bird-watching… no matter your passion or interest, there is a common link that we share; our passions enrich our lives. For Cheathy Gaye, of Providence, Rhode Island, food is what sparks his interest and makes him feel alive.

“Food is one of the things that Cheathy has always been passionate about,” says Zack Genest, Career Resource Specialist for Work Opportunities Unlimited. “One had but to look and see that food is the highlight of his day.”

Cheathy is a young man living with autism, and he wanted a job. As a Career Resource Specialist, Zack Genest works to break down the barriers to employment for people with disabilities. “During our job search process, which included internships and job trials, I could see that Cheathy was going through the motions, until it came to lunch. When lunch was mentioned, or lunch time rolled around, or he asked, “when’s lunch?” that’s when he would become highly motivated and expressive. It was an “aha!” moment for me. What some people saw as a barrier, I saw as an opportunity to explore but I knew we needed a positive and supportive atmosphere.”

The Seasons Assisted Living in East Greenwich, Rhode Island, is known for its culinary excellence. “Some people think of assisted living food as meatloaf and mashed potatoes,” says Michael Brissette, Director of Culinary Services at The Seasons, “but we serve high end meals from a restaurant style menu.  All of our food is prepared in small batches or to order, and 95% all entrees are made from scratch. Items like beef tenderloin and rack of lamb, roast turkey, homemade crab cakes and chowder are all made in house; we even make our own pickles!”

“I had worked with Zack in the past and consider him to be a great resource,” says Brissette. “He knows how to plug people in that fit, so I reached out to him to see if he knew of anyone that needed work. Zack came to The Seasons, looked at the job, and then he brought Cheathy in so that we could meet. I was impressed by Cheathy’s focus and passion for food and thought he would be a great candidate; I wanted to give him a chance. For me, if someone is looking for work and eager to work, and that person is truly invested in what we’re doing, that’s who I want to hire. That’s Cheathy.”

Cheathy was hired as a dietary aide and worked as a dishwasher but he quickly mastered that task, and was on to the next. “Mike Brissette saw his potential and said he wanted to see him grow, challenge himself, and learn new skills,” says Genest. “Cheathy transitioned from dishwasher into food prep and that’s where he really found his stride.”

“At first, he was nervous about food prep,” says Brissette. “But Seth, our executive chef is a great mentor. He really enjoys teaching the proper techniques; it’s always safety first with the tools of the trade, with a strong emphasis on food safety. Cheathy assists preparing fresh salads, some are made with romaine, others with iceberg lettuce; he’s a seasoned salad pro now. In the morning after getting dishes started, Cheathy prepares the fruit salad for the day. He stocks the continental breakfast in morning. For residents that don’t want formal breakfast, we bag up muffins that we make or bagels, coffee, tea, juices. He also replenishes the Country Kitchen snack bar; it’s open all day and it’s where residents congregate. No matter what he’s doing, Cheathy takes ownership of all those duties and when it’s crunch time in the kitchen, he’s right on it.”

“Cheathy hit the jackpot at The Seasons,” says Genest. “It’s a really supportive environment and he has some great natural supports in place. Plus, they understand his love for food – his passion. Often his favorite meal of scrambled egg and a sausage sandwich with pancakes and maple syrup is ready for him once his job is complete. At break time you’ll see him sitting and engaging in casual conversation with his co-workers. Cheathy’s doing something that he loves, he’s upwardly mobile and he’s building connections. It doesn’t get much better than that.”

“The basis of health for all of our residents is proper nutrition,” says Brissette. “Cheathy is a team player and his contributions play an integral role in enriching the lives of the people we serve. We feel privileged to work in their home and Cheathy does a great job of fulfilling his duties.”