It’s been a “must have” fishing lure in just about every New England tackle box for over 60 years. Just the name, “Al’s Goldfish” excites the most seasoned of anglers and conjures up memories of opening days gone by; nostalgia for this very simple lure that has the capacity to land spectacular trout, pickerel and bass… just about any fish with an appetite.  Once considered, “One of the Best 50 Fishing lures of All Time” by Field & Stream magazine, Al’s Goldfish had faded into obscurity, but in a small shop in Eliot, Maine, Mandy and Jeff DeBuigne are breathing new life into this classic lure.

Well known in New England, the DeBuigne’s have been working to rebuild the Al’s Goldfish brand and aggressively market to anglers in the mid-west and beyond. And like all entrepreneurs, they were working 24/7 to get the job done. “We were exhausted. We had no life outside of work, family was helping but we knew we had to hire some employees.”

“All of a sudden, out of the blue, we got a call from Jill at Work Opportunities Unlimited,” says DeBuigne. “Jill explained their mission of employment for all. That phone call was serendipitous because during the purchase of Al’s, Jeff and I realized that people with barriers to employment could be a good match for us. We wanted to give back, but we thought it might be heavy lifting; we hadn’t understood the concept of supported employment. When Jill explained her role as a job coach, the clouds parted, and light dawned. “

Jill Rowell is a Career Resource Specialist at Work Opportunities Unlimited. She spends her days breaking down the barriers to competitive employment for people with disabilities and employers alike.  She helps prepare people for the workplace and supports them on the job, but she’s also a resource for employers.

“We work to provide another pool of skilled employees for area businesses,” says Rowell. “I approached Mandy and Jeff and asked if they’d be open to on-site assessments to see if we could find a match for their employment needs.”

“Jill came by and we showed her the work environment and the tasks; she said she definitely had a match,” says DeBuigne. “She brought in two people, John and Nicole, and one thing we think is so cool is during the assessment, when John came in, I was working on a lure called the “Sebago Trolling Rig” – it’s a complex assembly. I showed him the process and explained that this is the type of thing we would like him to do. John nodded his head but after they left, he told Jill that he wasn’t sure he could do the job. Today we call John the Sebago King! He builds our inventory with the best of them and he’s on top of the world; he’s able to accomplish what he thought he couldn’t do.” 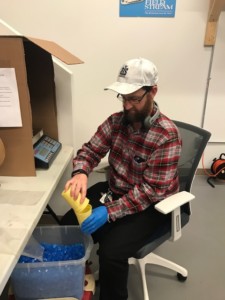 “During her assessment, Nicole was really quiet. She told Jill she didn’t want to work with fish but when Jill explained that no live fish were involved, she decided to give it a try. Once on-the-job, Nicole really blossomed and became quite social; she really cracks us up! Nicole has very special fine motor skills that blows us out of the water. She’s driven to succeed and incredibly efficient, I can only do half of what she does!” 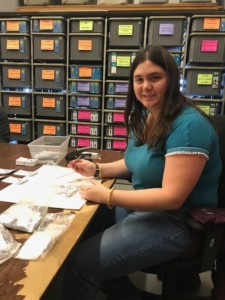 “Jill played a huge role in making this a success; the assessment and her support were key. If we had put an ad in the paper, I don’t think either of these employees would have responded. If they had, they might not have passed an interview. Any employer, whether they’re hiring someone with an impressive resume or someone with a disability, would value an opportunity to test drive an employee. The assessment levels the playing field and allows an employer to judge someone based on their abilities. Jill’s also the bridge to communication. She’s here with John and Nicole each day so if there are any issues, she troubleshoots with us and tries another way. Jill has a special skill set in terms of communicating with people who communicate differently, so we watch Jill and we learn how to communicate more effectively.”

“This was the first time that Jeff and Mandy experienced hiring people with disabilities,” says Rowell. “They knew early on that they wanted to commit to creating an inclusive workplace and now, having been through the process, they can see how it works and how effective employees can be. Hiring people with disabilities opens so many opportunities for the prospective employer if they are willing to give our clients a chance to work alongside other team members.  In my experience, team members learn from one another and this is no different having a John or a Nicole working side by side with those that may not have a work barrier or challenge; there are many ways to get to a finished product and sometimes it’s the one sitting next to us that come up with a better way.”

“John and Nicole have changed our lives,” says Mandy DeBuigne. “We were spending all of our time making lures and had we continued on that trajectory, Al’s would have fallen into oblivion. We’re able to focus on marketing now, and we all know if you don’t market, you’re not growing. So, John and Nicole allow us to try and grab another rung on the competitive ladder. And because of them, we’re able to take a day off every now and then, so they’ve also given us a semblance of life.  Without a doubt, John and Nicole are integral part of our team.”