(Riviera Beach, FL) – When two innovative and forward-thinking Florida companies come together, it can be life changing.

Alcides (AJ) Monroig Jr. of West Palm Beach wanted a job. It’s an easy ask for most but for someone with a disability, it can be a little more challenging.  “One day I got a letter from the Florida Division of Vocational Rehabilitation that I could fill out an application to receive support to help me find a job,” says Monroig. “So, I applied and that led me to Lisa at Work Opportunities Unlimited; she helped make this happen.” 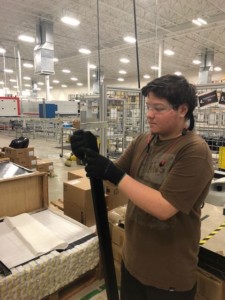 As a Career Resource Specialist for Work Opportunities, Lisa Jaloski dedicates her days to breaking down barriers, and opening doors to employment, for people with disabilities and employers alike. She helps prepare people for the workplace and supports them on the job, but she’s also a resource for employers.  “We operate from the premise that people with disabilities deserve to work independently in their communities, just like anyone else,” says Jaloski. “My clients are another skilled employee pool for employers to tap into – it’s as simple as that.”

Enter Solartech Universal of Riviera Beach. Dedicated to harnessing renewable sources of energy, namely sunlight, Solartech Universal is a manufacturer of state-of-the-art solar panels.  Its 75-thousand square foot facility is immaculate; its assembly line, complete with technical robots, includes teams of highly efficient technicians whose sole purpose is to advance the next generation of solar panels.

“Competition in this industry is fierce so we’re developing panels that are 3 to 4 generations ahead of the other markets,” says Paul Roraff, plant manager at Solartech. “The process is very much a linear assembly line, so every step of the way people must be on their game. One thing about this operation, if you miss five minutes, you can never get it back.”

As a growing startup there’s a lot at stake for Solartech. The company just added a second shift and Roraff says to make it work, it’s all about finding the right people.

“At the core of our hiring philosophy is equal opportunity for all,” says Jodilynn Brown, Human Resource Specialist at Solartech Universal.  “It’s important to us to create jobs here in Palm Beach County and to invest in the people in our community. We believe in a diverse workforce and we believe in the power of opportunity.”

“What makes Solartech so amazing is that they’re willing to give people a first, and sometimes a second chance,” says Jaloski. “We met with Jodilynn and told her about Work Opportunities and our mission. A month later, she reached out; Solartech was expanding to a second shift so we brought AJ in for an interview.”

“I remember the first time I met AJ,” says Brown. “He was so nervous during the interview. He stutters and was having difficulties communicating, but we just told him to take his time; we weren’t going anywhere. He took a few breaths and carried on. We were pretty impressed. AJ had checked out our website, he did his homework and was it was clear during the interview that he was in-tune with who we are and what we do.”

AJ had never held a job before but despite his lack of work experience, Solartech was willing to give him a shot. “They took a chance on me,” says Monroig. “They saw something in me that I didn’t see in myself.” 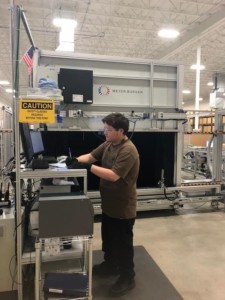 “It didn’t take long for us to see AJ’s potential,” says Roraff. “He’s younger guy who has a singular focus. This is not easy work, its fast paced and you’ve got to stay on top of what you do. AJ gets it. He consistently helps others and motivates the team; he’s the kind of employee that doesn’t have to ask, he just does. This is a guy that I have my eyes on.”

In the six short months since his hire, AJ has quickly moved up through the ranks. “I went from working on the assembly line as a Process Operator 1, to a Process 2 operator, and now I’m being trained as a Subject Matter Expert Coordinator – which is a team leader,” says Monroig.

“Everyone, no matter your disability or barrier, or what has come before, everyone deserves the same opportunity to succeed,” says Brown. “AJ has excelled here. He took the opportunity and ran with it, all we did was give him a chance.”

“We’ve hired five people from Work Opportunities Unlimited,” says Roraff. “They’re all wonderful employees. We figure out where they will fit on the production line and target a position that’s going to work best for them. They may have a disability, but they’re not treated any differently than anyone else; they work side by side with other employees, they work as a team, they develop friendships…everyone is given opportunity to grow here. As far as we’re concerned, they’re only limited by their own ambition and drive.”

“I was always that kid in school who was really quiet – I didn’t stand out that much,” says Monroig. “Now, I’m stepping in and standing out and learning and teaching others and creating friendships. It feels different; by having this job I’m seeing a change in myself, I’m more confident.”

“Solartech Universal is a model for how an integrated workplace should be,” says Jaloski. “When Solartech has a job opening, they call us; they’re not hiring one token person with a barrier, they’re truly invested. They gauge their employees by their ability, they customize how they train and manage their employees by really looking at the individual, they’ve even hired people who have blemishes in their background and given them another shot. As a result, they have dependable, loyal employees like AJ; someone who gives his all and is making a difference. Having a job can be a game changer – it certainly has been for AJ.”

“Solartech believes in me, and now I believe in myself. One of the best things about this job, is I can help my family with the rent and the bills; I can contribute, and that feels good.”