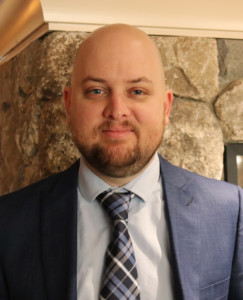 Bill is the Regional Director responsible for the Business Development Team and the services being provided by the Braintree and Taunton Teams.  He is tasked with developing and achieving strategic planning goals and expectations through each fiscal year, supporting the team members with training and on-the-job support, and directing services for local school districts, Vocational Rehabilitation, Supported Employment, and Department of Children and Families.

Prior to joining WOU, Bill spent nearly a decade as Shift Supervisor at a regional grocery store where he had the opportunity to work with individuals with different backgrounds and abilities, which led to his desire to work in the human services field. He joined WOU in 2009 as a Career Resource Specialist and was quickly promoted to Team Lead, and again promoted in 2011 to South Shore Director. With the growing demand of WOU’s services in the area, the South Shore divided into two teams, Braintree and Taunton, at which time Bill was promoted into his current position.

Bill received a Bachelor of Science in Communication Studies from Bridgewater State Unviersity and attended Connecticut School of Broadcasting. He is an avid Boston sports fan, and at one point worked in video production for live professional wrestling events.

The people who join Work Opportunities Unlimited (WOU) are special. They are compassionate individuals dedicated to helping people with barriers to employment find meaningful work. They celebrate every small success their clients achieve. Dayna Sharon [...]

People who work at Burlington in Leominster, Massachusetts are lucky they get to work with Richie. “He’s a person that everybody wants to meet,” says Lynsay Radzewicz, Director for Work Opportunities Unlimited (WOU)’s North Central [...]

Starting over in a new industry can be daunting, but when you have the support and encouragement you need, you may find you’re exactly where you belong. Patti White is a Career Resource Specialist in [...]

Work Opportunities Unlimited (WOU) announces the recent promotion of Dayna Sharon to Director of the Worcester & Framingham markets, effective October 2021. In her new role, Dayna is responsible for managing the flow of referrals [...]

Work Opportunities Unlimited (WOU) announces the recent promotion of Lynsay Radzewicz to Director of the North Central market in MA, effective October 2021. In her new role, Lynsay is responsible for connecting with local businesses [...]