(Chicago, IL) – Jordan Berman was struggling to find a job. A recent graduate from Florida Atlantic University with a newly minted degree in computer science and mathematics, Berman had it all; the education, the intellect and the drive to become an exceptional employee. There was just one problem – he couldn’t get past the interview process.

Diagnosed with the high-functioning form of autism known as Asperger’s Syndrome, Berman’s approached his job search in a way that made sense to him; it was organized and pragmatic.

“I took records of every place I applied, and I made a habit of documenting the interview so that I could track my progress, and follow-up with the employer,” says Berman. “The biggest issue I had when applying for jobs was, that even if I got an interview, they never told me why I wasn’t chosen for the position. I’m a practical guy. If they told me why, I would take their recommendations and make adjustments; I wanted to improve myself. It was an issue because I wasn’t sure if what I was doing was helping or hindering my process. I received conflicting signals and it made me feel irritated because I spent a lot of time in college to get a degree so that I could get a job in an area that I was interested in – and it wasn’t working.”

Founded on the principle that all people deserve to work independently in their communities, the non-profit organization based in West Palm Beach, Florida, works to remove the barriers to employment for people with disabilities.

“Jordan came to me right out of college,” says Jenni Paine, Career Resource Specialist at Independence Works. “During our first meeting, he presented me with pages and pages of notes detailing all the jobs he applied for, and records of the interviews he’d had – it was pretty amazing. It was clear that he had no issues with the job search process. The sticking point was the interview; Jordan was challenged with connecting with the interviewee.”

“Asperger’s can be characterized by difficulties with social interaction. For some people with autism, connecting and understanding interpersonal nuance is a complex maze that feels impossible to navigate,” says Paine. “Jordan was on-point with factual information but interpersonal connection was difficult for him, so this is where employers were probably feeling that he was qualified, but without the understanding of Asperger Syndrome, they couldn’t put their finger on what it was that seemed a little off.”

“Jenni helps people like me,” says Berman. “She helps you develop a proper resume and better interviewing skills; she showed me ways in which I could act better to help me secure a position.”

“We did lots of mock interview set-ups, all the while scouting out job possibilities,” says Paine. “At one point, I had spoken to Ernst and Young (EY) and eventually got in contact with Jamell. It was the connection with Jamell that opened the door for Jordan.”

Known as one of the largest professional services firms in the world, EY is one of the “Big Four” accounting firms. “They’re heavy hitters,” says Paine, “and they have a storied history of hiring and supporting people with disabilities.”

“We have a strong commitment to fostering a culture that’s what we refer to as ‘abilities inclusive,’” says Jamell Mitchell, Neurodiversity Centers of Excellence (NCoE)Operations Leader at EY. “We also have a need for talent to develop and implement solutions with emerging technologies.  At NCoE we’ve created a platform where people with exceptional skills can succeed. We recognize that by harnessing this talent – untapped in the market – it will drive efficiency and innovation, which ultimately helps the company have a better bottom line.”

NCoE is a groundbreaking EY initiative that recruits and hires people with disabilities, 90 percent of whom have received an autism diagnosis. But rather than a traditional interview, complete with a firm handshake and a winning smile, EY takes job candidates through a process that combines virtual interaction with an in-house “Superweek” of team building and skills assessment.

“I was really lucky with the EY experience for two main reasons,” says Berman. “During the interview, I was doing it from my own home via Skype so there was no pressure from being in a completely new place; it allowed me to have some confidence. And part of the interview process was in test form so I could demonstrate my skills and they could see if I was proficient technically. The combination of the two qualified me for Superweek in Chicago.”

“Superweek” is a weeklong residence at EY where soft skills, team building, and technical expertise is assessed, feedback is provided, and job offers are made. “Throughout the weeklong process, there’s an awareness that there may be a delay in speech, curt responses, or no eye contact,” says Mitchell. “We know these individuals are highly skilled, what we want to gain from the conversation is whether the person is a match.” 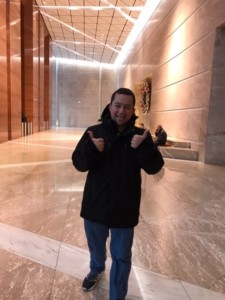 “Superweek in Chicago was a big gamble for me,” says Berman. “I had to fly cross country for the first time on my own – it was scary – but at that point, I really had nothing to lose. I wanted to find a job that was uphill. I wanted more money and a position that allowed me to climb the ladder of opportunity. I didn’t want to leave my family but taking a pass would insult everyone who helped me get to this place.”

Jordan jumped into “Superweek”, gave it his all and was given an offer. He’s now an Account Support Associate at NCoE in Chicago. “Jordan is amazing,” says Mitchell. “He’s working on technology innovation and coming up with solutions for different processes that support our clients; I consider him a solutions architect. Every deliverable has been exceptional. He’s conscientious, reliable, takes initiative and committed to the team. Jordan is on our short list for advancement.”

That moment of accepting the position felt weird,” says Berman. “It didn’t hit me right away that I’m going to have a career, in a new location away from my family and live on my own, but that’s what happened. EY gave me a career and a new life. It gave me the opportunity to be independent.” 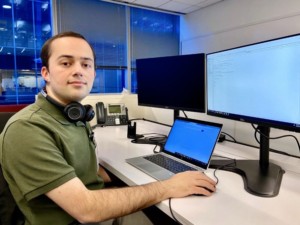 “I don’t know if there’s really any words,” says Jennie Paine. “We struggle a lot to get people placed in employment. It’s a big challenge for companies to look past the disability and see the ability; I mean people really struggle. So, to know that EY has this process in place that sees the brilliance in this young man, and that he’s thriving… it brings me to tears.”